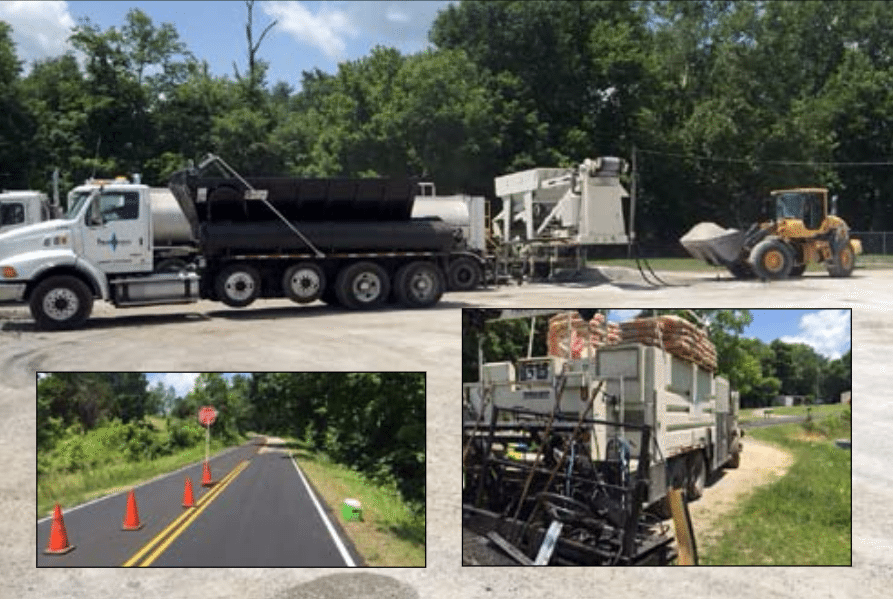 Unusual looking trucks that include a hopper and a tank on each side have been seen here lately. They are hauling small aggregate, water and an emulsion from a staging area in Celina to supply a microsurface paver that is renewing Baptist Ridge Road (TN 292).

A crew from micro-surfacing company Hudson Construction of Chattanooga, TN is applying the new surface at a cost that is approximately one-third that of milling away and filling in with new hot mix asphalt. The new surface is expected to last at least seven years, but can last much longer. This same road last received a micro-surface about 14 years ago.

The trucks connect to the surfacing machine—which mixes the ingredients as they are delivered from the truck. Some dry cement is added also to strengthen the mixture and aid in its curing. The mixture is then spread approximately 3/8 thick and leveled in one pass. Roads treated in this manner may be driven on in as little as one hour after application.

Developed in Germany in the late 1960s and early 1970s, micro-surfacing was pioneered as a way to apply a conventional slurry in thick enough layers to fill deep wheel ruts, but in narrow enough courses so that the expensive road striping lines on the autobahns would not be destroyed (“what is microsurfacing,” n.d.). Introduced to the United states in 1980 after Dr. Frederick Raschig presented his new slurry system, Ralumac, at the International Slurry Surfacing Association (ISSA) convention, microsurfacing is now used throughout Europe, the US, and Australia and is making inroads into many other areas [4, 7]. The main benefit achieved from microsurfacing over alternative pavement treatments results from the polymer-modified asphalt emulsion that chemically speeds evaporation of moisture. This enables it to set in less than one hour in most instances, requires no rolling, and allows traffic to return to the roadway quickly. (Ben Broughton, Soon-Jae Lee, and Yoo-Jae Kim, “30 Years of Micro-surfacing: A Review,” ISRN Civil Engineering, vol. 2012, Article ID 279643, 7 pages, 2012. doi:10.5402/2012/ 279643)

Ready to Get Started? Want To Learn More?